Having read Melissa’s review of the January 2012 issue of Knipmode and given Knip’s recent underwhelming performance (through all of 2011 goshdurnnit!) I steeled myself for disappointment (and fortified my spirits with cake) for my first browse of that issue.  It was all low altitude cruising over dullsville until I fell across this (with my mouth open-thank goodness I had cake to land on):

That is when I remembered having seen this picture somewhere (probably in their online mini-preview) and being excited about this issue (and its not just because of the red haired model either-although that is probably a defining factor*). The line diagram is a little less exciting- the dress flares at the hem line rather than the tulip shape shown in the picture- I’d love to make this dress with an actual tulip skirt with massive pockets like the one on the cover of Patrones Fiesta No. 291. 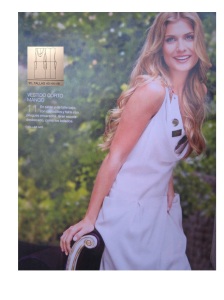 I love the neckline on Jurk 18 and I’m coveting massive pockets at the moment but actually tracing both patterns out (after having graded the Patrones dress to my size first) and then morphing the two into one wearable garment has already put me on the first flight to procrastination central (it.s 12:14 PM and I’m still thinking about this-while surfing sewing blogs -in bed naturellment. Anyway if you thought that dress was fabulous in floral border print wait till you see its other iterations:

Did I already say I loved that neckline? Using a wide bias inner to turn in will give a really cool banded collar look similar to the view in the satin fabric (but better because its in my head). I’ve actually tried making a similar dress (tunic) before from Simplicity 3835 (Very Praire’s awesome version turned my head with allusions of tunic-grandeur) but it was pain to make and the close-fitting jewel neckline doesn’t suit my long neck (sans scarf). So I’ve got high hopes for Knipmode 02/2012’s Jurk 17/18.

Other stand-out garments in this issue include: 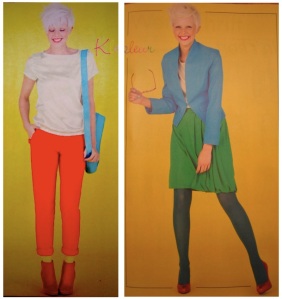 I’ve been dying (figuratively – possibly because actual death is fairly inhibitory to pants-making) to make a pair of pants and these are perfect (except Knipmode styles run tall so I was thinking to trace a pair of Burda petite pants and then modify these accordingly).The top is awesome as well-mainly because it only has 3 main pattern pieces and I have gold silk in stretch and regular versions to make it with. Also, how cool does the model look? Kinda reminds me of a certain wardrobe refashioning cutie.  I pooh-poohed the skirt as something they’ve done before until I came across this: 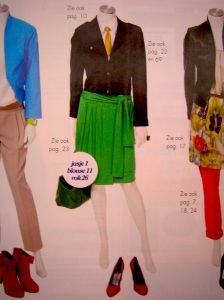 Out of sight = out of mind (i.e. absence of weird draping makes the heart grow fonder-for Jurk 26) so put it behind you. Don’t know what effect all that draping will have on the behinds of prospective wearers though-probably better for the naturally flat-cheeked among us..

The best part though was the back cover- which says something along the lines of ‘6 issues of Knipmode and Disney patterns for your little ones’ (thanks Google translate). 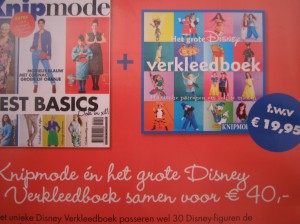 That is the most realistic Donald Duck costume I’ve laid eyes on. That costume alone is worth the cost of the entire book. I don’t recall ever having seen such a realistic Donald outside of the actual cartoons-I can hardly believe there’s a small child (or two) inside it.

And next time- a tunic (yaay) and a bijlage (extra supplement) issue (double yaay). 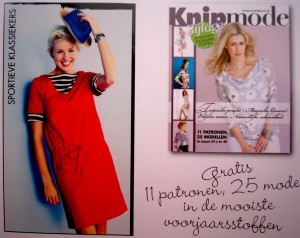 *Red hair is non-existent where I come from-a naturally red-haired individual would literally (not figuratively) be one in a billion there. So for me, red hair is awesome and I fail to understand the (usually ‘comedic’) anti-ginger sentiment in Australia. In my mind the only better hair colour than red is that woody dark brown that kinda mutes to an 30s autumnal hue when its been in the sun too long..