Not a fan of drama. But I do like a dramatic collar (and soft focus but that’s a story for another day-obviously I’ve been irreparably damaged by the vaseline lens style of ’90s afternoon-soaps).

Everything that could possibly go wrong with this jacket, did. It’s a bit of a blooper, but I love wearing it. I cut out the pieces two years ago and they’ve sat under the bed since. While sewing this up:

I’m sewing up the jacket that was under my side of the bed. You can vacuum under that part of the bed normally now.

C: I’ve never not vacuumed normally under there.

AUGH that explains everything!

C: Oh sorry was it all messed up?

No but the thing I’d left on top of it was.

C: Lucky you left two things down there! =D

Those metal-shanked buttons were a b*tch to sew. The (metal) shank was too large (given the thickness of the buttons) and I had trouble hand-sewing it on. Two of the buttons have loosened since then (no prizes for guessing which ones) and have had to be re-sewn.  No more metal shank buttons for me. I went through all my vintage books for info on metal shank button hand-sewing but only (and for the first time ever) the Vogue Sewing Book (1970, yup, first edition, don’t hate-it’s missing the slip cover) had any information on it.

What? What? What’s with the cryptic final sentence? And I need more on the toggle insertion dammit, don’t stop! Show me pictures! *Furiously turning pages* Urrr.. That’s all there is. Damn you Vogue. You’ve failed me again. I found this video which was crap because the (nice) lady’s just looped thread straight through the fabric instead of sewing tied off stitches (i.e. if one of her stitches breaks, the button will eventually work it’s way loose and fall off- which I can’t afford because these buttons were $3 a pop and I don’t have spares XS). This video’s a little better (watching it with angry French hiphop instead of the original soundtrack helped massively).

Anyhoo, it’s done and the construction doesn’t suck too bad (I’m not happy with it, the front’s wonky-not in an obvious way but I know). A friend of mine that loves chavs loved the collar (he didn’t know what a chav was till I lent him the first two seasons of Misfits and Phoneshop-then he fell in love with Kelly and started wearing his collars popped). Pretty sure I’m safe though because it doesn’t have a Burberry lining. 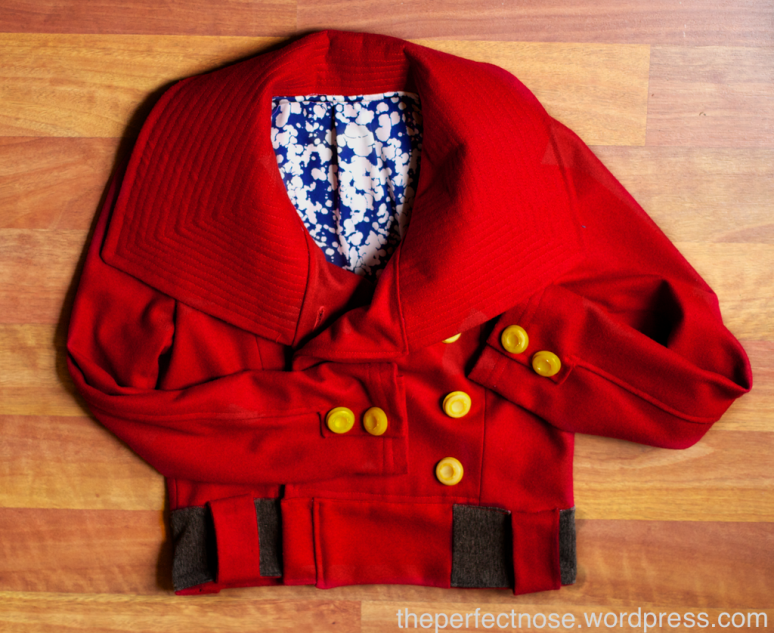 Jacket Pattern: Knipmode October 2008, Jacket 6b (there’s also a Coat version of this in the same issue). If you’d like to try your hand at Knipmode outerwear, I’m giving away their winter supplement here.

Fabric: Wool melton for the main body, wool herringbone suiting (yep, blooperiffic) for the under collar and waistband.

Modifications: Shortened it at the waist, did a shoulder-swivel swayback adjustment and omitted the collar stand because I only need the collar it to keep my ears warm, not my forehead.

Omitted the pockets because I find pockets in wool fabric get stretched out/ misshapen pretty quickly.

Made the waist tie and promptly lost it because it makes the thing looks like a dressing gown.

Comments: I sewed up the two-piece sleeves with vents by modifying these directions from the book Coats & Capes from the Bunka Fashion Series of textbooks. Disclaimer: All non-self-generated images remain copyright of their original owners and are used here for the purposes of illustration and discussion.