Sewing in the Media: The Great British Sewing Bee S1/E1Reviewed

I forced Carl to sit through this with me. Good to have a civilian present to help document the bloodshed. It was fairly entertaining.

Episode 1: The stage is set, some entertainment occurs. Some of the contestants: charity worker Michelle-gorgeous, extra points for hubby attempting to feed the kid on camera (amateur feeder?). Extra, extra points for shoes-off machine operation. Sandra’s a sweetheart (the trauma of all having to wear the same curtain dress at the same time without the benefit of being actual triplets=learning to sew for yourself from an early age). Mark the lovable pirate (BBC2 seem to think Steampunk is an actual historical era. Carl: they obviously spend too much time on Etsy). Ann- her 75 years of sewing experience is going to kick everyone else in the centre back seam. Lauren: Best accent ever (Carl agrees).

Stuart. He’s in a class of his own. My heart says Stuart for the win. My head disagrees. May Martin, Sewing Expert with 40 years of teaching experience (100% bullsh*t-free) the submissives are gonna be lining up for  her sewing classes.

Suave talking-beard and Saville Row businessman Patrick Grant (described as a ‘brilliant tailor’ by the host who seems cute and all but I have trouble taking orange people seriously-given time I suspect she’ll grow on me. Much like a fungus).

Total desaturation is an unfortunate effect of adjusting out the deadly orange hue..

Oh the men are going to rock at this..

I’ve never made a skirt before, Claudia. A-line or otherwise.

Lovely to have you here Stuart.

Sandra-puckering at seams and zipper, Jane-obvious pattern mismatch at seams and darts, Stuart-uneven top-stitching, puckering everywhere (Patrick: You seem to have issues with moving fabric through the machine). Mark-concealed zipper fail, Michelle apparently has puckering on the trim (what?), Tilly-puckering at dart ends and seams, general bagginess of silhouette, concealed zipper mismatch and uh.. those pockets..

Carl: Oh g*d it looks like a private part. With flowers on it.

Patrick: If you are going to add something make sure it doesn’t detract from the overall impression of the garment.

Yea. That.  I’ve said this before: seam-line pockets are lazy and look messy. I’ve had (majorly irritating) personal experience with their presence in commercial patterns (the big four are major offenders in this area but Patrones does it too). I don’t include pockets of this sort in my makes anymore: they gape and add bulk at the worst possible place. Yes, contrast facings and linings are awesome (and a great way to use up scraps) but the insides of pockets are meant to be concealed (Claire Schaffer and any number of vintage sewing books agree with me on this).

Anyhoo Patrick concludes that the men suck at making skirts (and it only took him 3 hours to figure it out) first place goes to the person that used a lining and did it well. Sandra eff yea.

Sandra: my daughter’s ‘ll be like balls a pop.

Whatever tickles their fancy dahling. Edit: she meant bottles of pop-possibly the first time since the 1770s that carbonated beverages have been a big deal. Or any sort of deal at all.

This was followed by a short feature on historic aspects of the home-sewing pattern industry. 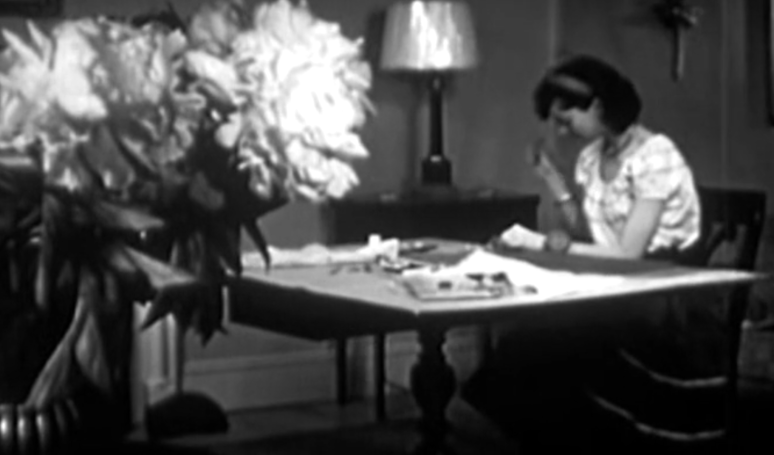 That’s better. The pug in the gas mask is an added bonus.

Challenge II was a garment refashion titled, changing the neckline on a high-street top.

Sandra sewed on the facing back to front then cut off the seam to fix it. (I saw this on the teaser clip and was overwhelmed by the desire to smack her across the back of her head with a laptop-others had a more measured response).

Patrick: In tailoring we call that ‘a bit of pork’. Read:in tailoring Patty gets a special sandbox to play in, keeping him well and truly out of the way of the real tailors (amateurs, on the other hand, get to suck it up and act like they love it). Because Ann is awesome. She will cut you (with a dull rusty pair of snips) and you will thank her politely as you stagger out of the room clutching your innards.

*Make bloody sure it’s not a PeterPan then.*

Too short for the neckline so there’s a raw edge where it doesn’t meet at centre front. Everyone sucked at this. Michelle’s version sucked least of all. And Ann’s. Because Ann is awesome.

Patrick to Jane: It’s good from afar but far from good.

Edit: He’s ostensibly straight *the twittersphere groans collectively and goes back to looking at cat videos*.

Challenge III-Dressmaking for (and fitting onto) a regular human being

Patrick to the host: I’m not a lover of the scallop-even if it’s done well. You have good taste Sir. Lauren appears to have omitted the zipper from her Colette Macaron. Or something. Tilly’s making a scallop-necked vintage dress–right after the main judge said he’s not into scallops. Tilly for the win.

Ann-pretty good fit (some puckering at the sleeve-head), weird 80s colour combo. The model seems to love it. Lauren-over fitted, stress-lines and tightness everywhere. Bust darts are pointing someplace weird. Mark-some puckering at the princess seam curve, but otherwise awesome especially in the arrangement of the dot print and especially considering this is his first dress. Ever. Michelle-stretched out neckline (should’ve seam taped the silk immediately after cutting. At least she used a rotary cutter instead of the dressmakers shears everyone else was rockin’. Work it, lady). Sandra-frumpy as all heck but well made. Stuart-combined a massive repeat pattern fabric with a sectioned dress pattern. Every single seam has obvious glaring pattern mis-matches and the fit is hideous. His poor model looks pregnant but not in a good way. Tilly-um… May wants to burn it. I suggest using it for the next refashion. Aunty Beeb (i.e taxpayers) paid for the fabric afterall.

Neckline not laying flat, weird poofiness all over the bodice, weird lumping at the waist seam and wonky hem. During the actual sewing session Patrick passed by Tilly and told her to remove the excess fabric at the bust using darts.

He’s a judge and he solved fitting issues for a contestant. Thanks Patty. Welcome back to the wasting-all-the-Oxygen-in-the-room-train. You’ll be riding it solo for the rest of the season.

Tilly’s response: No idea where the other dart’s needed.

Uh.. it goes where the excess fabric is. He just gave you the answer. Make an armhole to bust point dart and be done with it.

Then the contestants went away and the judges discussed their decision with the host. And this happened:

Aaand Patty’s locked to Oxygen-wasting mode for the rest of the season.

Patty, sweetheart, fitting to the shape of the model was point of the last challenge. Do not blame the model. She is perfect as she is.

And so Michelle got sent home. She messed up one out of three challenges and got sent home. The end of this episode was like every American movie where the black guy dies first. Except this time it was totally unexpected.

Conclusion: Somewhat entertaining. I wasn’t happy with the decision to cut Michelle and have adjusted my expectations accordingly (Carl went and signed up to their website so he could comment on the idiocy he’d just witnessed).

Hopefully this series doesn’t have the Yay-let’s buy a shitty plastic POC sewing machine then ditch it when we realise the work involved effect that Project Runway had on the general viewing public.

Previously, on Sewing in the Media.

Disclaimer: All images remain property of their original owners and are used here for the purposes of discussion and review.